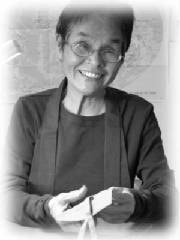 The practice of sewing Buddha’s robes has been a tradition in this country since the early 1970s. Our founding sewing teacher, Tomoe Katagiri, studied sewing with Eshun Roshida Roshi at San Francisco Zen Center and in Japan. Tomoe brought the practice with her to Minnesota Zen Meditation Center and taught sewing here for nearly 40 years until her retirement. Sewing the robes (called okesa), bowing cloths (zagu), and miniature robes (rakusu) is now taught by Tomoe’s student and successor, Rosemary Taylor, with the help of dedicated assistants.
All priests at MZMC sew their own okesa and zagu; laypeople who choose to receive Zen Initiation sew their own rakusu. This style of sewing is a meditative practice in which the sewing student takes refuge in the Buddha with every stitch.
Tomoe’s sewing book is available as a download. It is a very valuable resource, but the instructions are best used with a teacher's guidance.