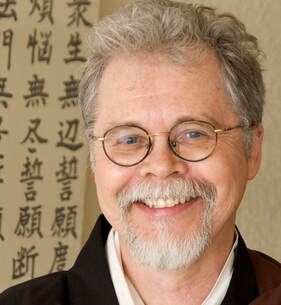 Ted O'Toole first became interested in Buddhism in 1973, and began his formal practice in 1992 at the Zen Buddhist Temple in Ann Arbor, Michigan. The following year he moved to Minnesota and became a member of MZMC, where he received the precepts from Shohaku Okamura. He was ordained as a priest by Tim Burkett in 2005, and received dharma transmission (permission to teach independently) from Tim in February of 2012. He frequently leads practice periods and meditation retreats, and has taught various classes, including Basics of Buddhism, the Four Noble Truths, Creative Writing as Buddhist Practice, and Zen and the Art of Public Speaking.

Ted grew up on a farm in North Dakota, and often incorporates his early experiences into his dharma talks. He has done construction, packing plant, and factory work, and currently works in the legal profession. He and his wife Kathy Guthrie live in St. Paul, and enjoy their extended family, as well as gardening, house projects, biking, cross-country skiing, and writing. It is a great joy, Ted says, to teach the dharma and build sangha, and to be supported in turn by a kind, vibrant, and exciting community.

Priests at Minnesota Zen Meditation Center make a lifelong commitment to teaching and exemplifying the Dharma. The responsibilities of priests are many and varied, and include much service to the community. They may teach classes, lead practice groups, lead meditation retreats, and give dharma talks. They may conduct rituals, conduct practice meetings, and offer pastoral care. They are expected to hold an office at MZMC, such as ino (practice leader), tenzo (cook), or work leader, and to have a consistent presence within the community. Some of them lead or help to facilitate practice groups in other locations as well. Priests maintain a regular and disciplined zazen practice, which includes both daily practice and retreats. Priests tend to be very busy people, and although they often find it challenging to balance family, work, and training activities, they know that this balancing is the very heart of their practice. They are committed to the Bodhisattva ideal, and feel profound gratitude for the opportunity to serve at MZMC and to be a part of this practice community.

Priest training at MZMC follows the model Guidelines for Training Soto Zen Priests in the West, which was developed by Tim Burkett and others under the auspices of the Soto Zen Buddhist Association (SZBA). Priests-in-training are expected to become knowledgeable as to the history and teachings of Buddhism through study, classes, and, most importantly, working directly with their teacher. Training focuses on developing priestcraft, exemplary personal conduct, self-understanding, and academic study.

MZMC has designated a group of zen practitioners as lay teachers. These are long-term Zen Center members who have been recognized as qualified to guide others in their practice due to their years of practice, spiritual depth, and devotion to our sangha. The lay teachers will engage in various teaching activities, including giving dharma talks at MZMC, and are available to meet with students in order to guide their practice.

These individuals have received dharma transmission (certification to teach independently) from Tim Burkett, who was the Guiding Teacher of MZMC from 2002 to 2020.  Click on their names below to learn more about them. To schedule dokusan (a one-to-one meeting) with one of them, please contact info@mnzencenter.org
Tim burkett, Senior Teacher
After completing his BA at Stanford University, Tim attended the maiden practice period at Tassajara Zen Mountain Center in 1967. In 1970, Tim and his wife Linda moved to Minnesota. He was an early member of MZMC and was ordained by Dainin Katagiri Roshi in 1978. Tim served as board president of MZMC from 1978 to 1983, received dharma transmission from Sekijun Karen Sunna in the Katagiri lineage in 2000, and succeeded Karen as Guiding Teacher in 2002. Tim and Linda live in Minneapolis and have two grown children and two grandchildren.

Tim is a licensed Ph.D. psychologist, whose doctoral work focused on neo-shamanic practice. He is also the retired CEO of one of Minnesota's largest non-profit agencies, People Incorporated, which provides community-based service to individuals with mental health concerns. Shambhala published his first book, Nothing Holy About It: The Zen of being Just Who You Are, in 2015 and will publish his second book in 2018. A central focus of Tim's first book is his discussion of the impact of Suzuki Roshi's teaching on his life and on his own Zen own teaching and life, while the second book focuses on practicing Zen in our modern, fast-paced world.

Tim Burkett was the Guiding Teacher of MZMC from 2002-2019. He offers teaches, leads retreats, and enjoys meeting with MZMC members one-to-one. You can schedule a meeting with him by contacting the office info@mnzencenter.org
BEN CONNELLY, SENIOR TEACHER
BUSSHŌ LAHN, SENIOR TEACHER
Susan nelson, senior teacher
​Susan teaches mindfulness and meditation in community settings and also works as a healthcare chaplain on a part time basis. She and her husband enjoy their large family and circle of friendships immensely. She loves to sing and participates in a choir that performs in hospitals, care centers, and homes. She particularly enjoys mentoring people in their Zen practice and study and in facilitating experiences of practice and community for non-traditional and potential sangha members.
ROSEMARY TAYLOR, SENIOR TEACHER

Wayne Moskowitz
deb Mielke
Deb has been a member of MZMC since 2012 and received the precepts from Guy Gibbon in 2013. She became interested in Zen Buddhism in the 1970s when taking an after-school class on meditation and Zen Mind, Beginner’s Mind in Duluth from Tim Burkett. After many years of exploring various traditions, casual meditation, and reading Buddhist literature, she joined the Sangha with her partner Benton Jackson. She enjoys the many class opportunities, practice periods, and retreats, which support her practice and daily life. She has served on the board and continues to participate on the membership committee, as a tea-cook, and on the flower crew. Her interests are health care for underserved populations, nature, walking, quilting, reading, and meditation.Deb finds MZMC the place where she is able to continue working on her understanding the Bodhisattva Vows and taking refuge in Buddha, Sangha, and Darmha — and just be around a lot of really amazing people.